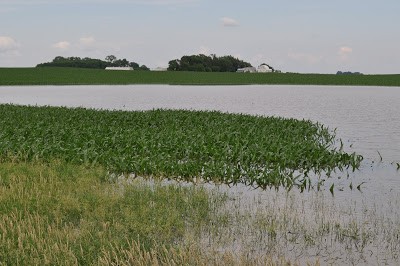 Minnesota is one of the states most impacted by climate change. Official precipitation and temperature data has been collected in Minnesota from 1895 through today, showing some striking statistics about our changing climate:

These changes are impacting Minnesota's wildlife, forests, water quality, infrastructure, and outdoor recreation (especially winter sports). Below are some links to MN DNR infographic GIFs that shows the change to our 30-year average winter temperature and 30-year average yearly precipitation: 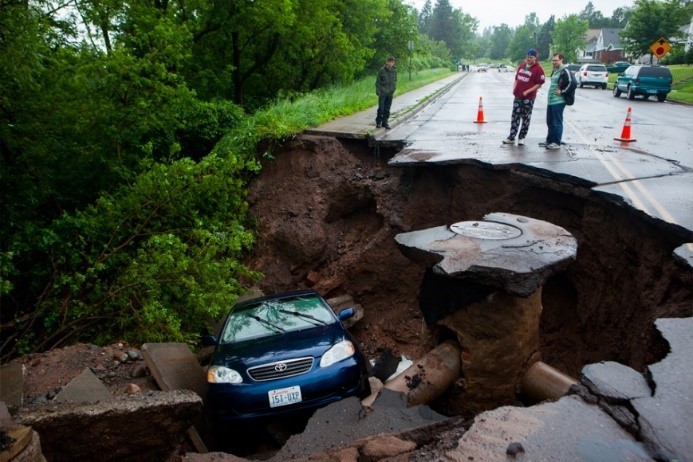 Sinkhole in Duluth Following a 7"+ Rainfall
As you can see, Minnesota's winters are warming dramatically, with the 9˚ contour moving  north by as much as 150 miles. Similarly, the 26" contour for precipitation has migrated roughly 100 miles to the Northwest.

We witnessed the impact of elevated precipitation in 2012 when the most damaging flood in Duluth's recorded history began when heavy rains fell over already saturated ground on June 19th and 20th. At the Duluth National Weather Service (NWS) the rainfall total for those two days was 7.24 inches. A NWS volunteer observer in Two Harbors recorded the storm's largest value of 10.45 inches in 24 hours.

The aftermath included millions of dollars of insurance losses to repair roads, bridges, homes and businesses. Many homes foundations were damaged extensively and the houses were razed. One state highway (MN 23) was closed for 3 years while it was repaired. The City of Duluth has had to adapt their stormwater infrastructure to withstand events that 30 years ago were considered 500-year events, but now happen regularly. In June 2018, just southeast of Duluth, the area received up to 10" of rain and once again damaged Highway 23.

Here in Anoka County, we've witnessed a similar story in 2019, with all of the monitored lakes, rivers, and streams in the County reaching historic water level averages for the year. This increase in precipitation only solidifies the need for comprehensive watershed management to make sure that our infrastructure and waterways can handle the increased erosion and flow produced by this additional rain.

Cut back on Salt to Protect Minnesota’s Infrastructure, Water Quality, and Aquatic Wildlife

What in the World is a Rain Garden?