What is an As-Built, and Why is it Important?

ACD recently led a project that improved the water quality benefits provided by two stormwater ponds adjacent to Martin Lake in Linwood Township. The project increased the size and depth of the ponds to the maximum extent practicable within the limited spaces available. The projects were a great success, and were recently highlighted in an outreach article titled, 'Water Quality Improvements Constructed for Coon and Martin Lakes'. They're worth mentioning again in order to highlight a critical piece of successful construction management that most people never see, the as-built survey.

As-built surveys, also commonly referred to as record drawings, provide formal documentation of exactly how a project was installed. They document the actual results of the construction project rather than the planned layout shown in the project design and are critical for project closeout.

As-built surveys ensure the project was built to meet the specifications in the original plan set. This allows the project engineer to confidently sign-off that the project was installed as per the plan. If any deviations from the original plan were approved during the construction process, the as-built survey will show the changes as they were installed and provide an opportunity to formally document those changes. Final payment to the contractor is also typically withheld until engineer sign-off on the as-built survey.

The as-built survey also provides a formal record that can be used to standardize how a project should be maintained over its lifespan. In the event of these stormwater ponds, accumulated sediment and debris should be periodically removed to achieve the original design depths in order to ensure the ponds continue to function at maximum efficacy.

Depending on the type and scale of a project, multiple as-built surveys may be completed throughout the construction process to confirm critical elevations and layouts are being met prior to approving advancement to the next construction step. They are typically shown as an overlay on the original plan sheet to allow a direct comparison and easy identification of any significant deviations from the original plan.

The 228th Place stormwater pond as-built (see plan sheet below) documented key elevations around the pond to ensure safe side slopes were achieved. It also documented the stabilized outlet and controlled overflow elevation to ensure neighboring properties were not at risk of flooding as a result of the project.

As-built surveys and the associated formal documentation they provide can sometimes be neglected because project installation went smoothly and according to plan, but they are a critical component to successful construction management and project closeout. 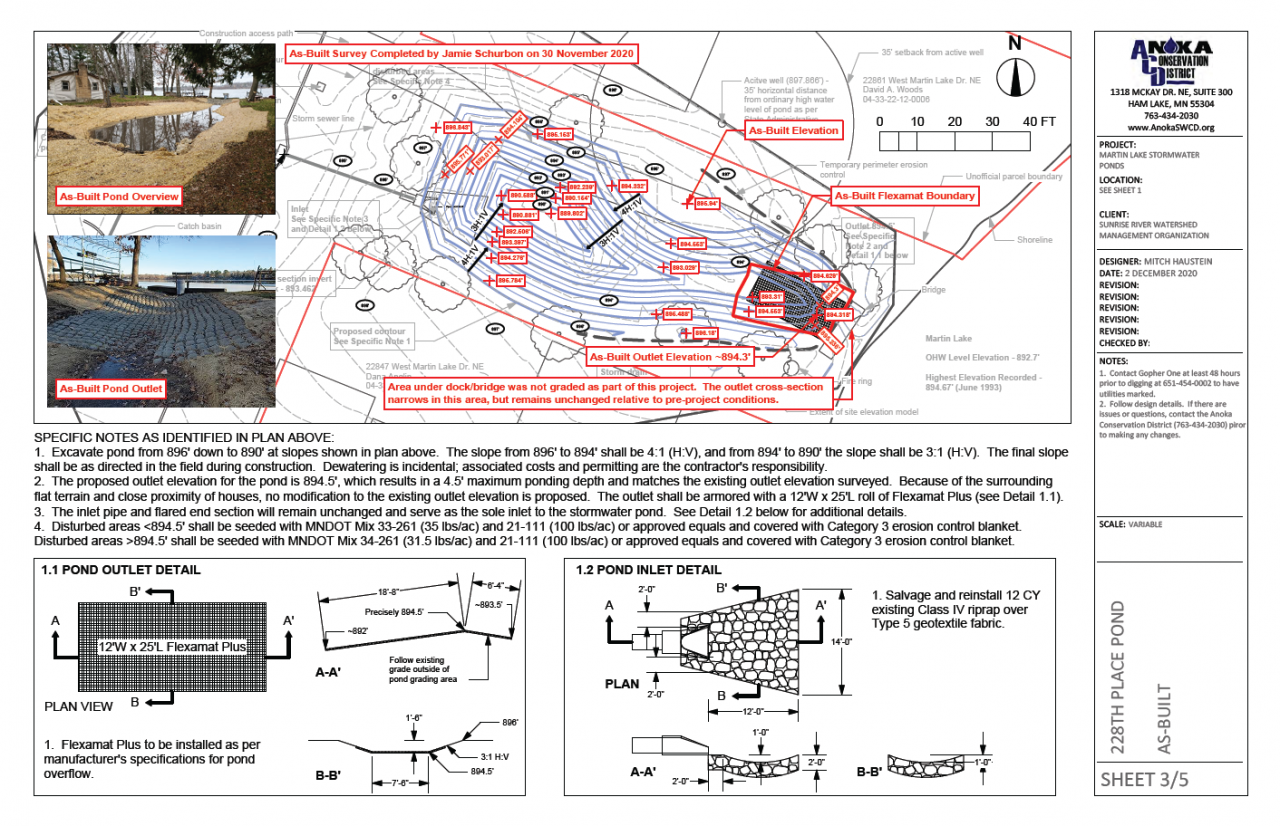