Common and glossy buckthorn are common invaders in native landscapes; common buckthorn grows mostly in upland environments while glossy buckthorn grows in wetland environments. ACD is working to control buckthorn at sites that still have intact native plant communities and rare plants to ensure those quality sites do not become further degraded. Work this winter is taking place at Robert and Marilyn Burman WMA, Cedar Creek Ecosystem Science Reserve, and Blaine Preserve SNA with funds from the Clean Water, Land and Legacy Amendment. 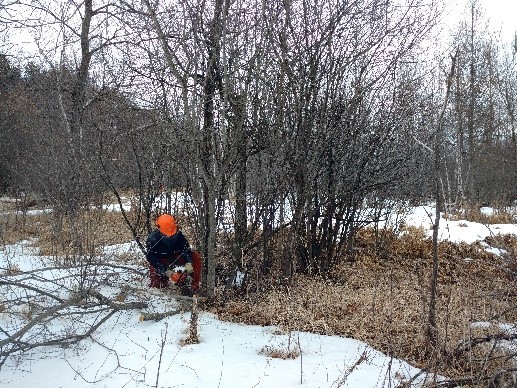 Look Out for Oriental Bittersweet 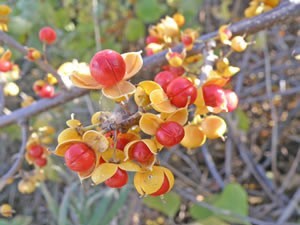 Now that there are no leaves on the trees, it is a good time to look for Oriental Bittersweet (Celastrus orbiculatus). This invasive species is on the ERADICATE list. It is a vine that girdles and smothers trees and shrubs. Look for the bright red fruit with yellow capsules.

The Recovery of the Wild Turkey Population in Minnesota 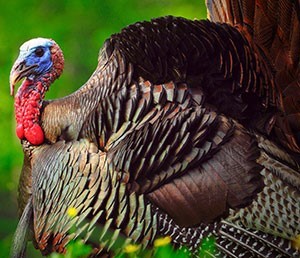 Did you know that wild turkey had gone from a native population of millions of birds to being almost extirpated by 1900 in the United States?

The restoration of the American wild turkey is one of the greatest wildlife conservation success stories.

That success story began in 1973 in Minnesota. The MN DNR traded a flock of its homegrown ruffed grouse for 29 turkeys from Missouri. The Missouri-born birds were released in Houston County in southeastern Minnesota and the population grew rapidly. Many partnering turkey advocates aided in their return, including members of the National Wild Turkey Federation who helped transport the flocks to new habitats. The restoration of the wild turkey over the past 25 years is one of Minnesota's greatest conservation success stories. Once rare, today wild turkeys are becoming a common sight throughout southern and western and even central Minnesota.

Wild Turkeys live year-round in open forests with interspersed clearings. They nest on the ground in dead leaves at the bases of trees, under brush piles or thick shrubbery, or occasionally in open fields. Wild turkeys are omnivorous, and their diet changes by the season: in spring and summer, they eat insects, seeds, and leafy vegetation; in fall and winter, they eat tree nuts, seeds, and berries. They will also eat small amphibians and reptiles. Poults, young turkeys, feed heavily on insects.

The Anoka Conservation District with funds from the Outdoor Heritage Foundation and National Wild Turkey Foundation is enhancing turkey habitat at the Robert and Marilyn Burman WMA and Gordie Mikkelson WMA. Tree thinning and buckthorn removal will open the forest and promote oak regeneration. Acorns are a favorite fall food. Increased native plant diversity in the woodlands, savanna, and prairies will attract a diversity of insects, providing a high protein food source.

Give thanks to the many conservationists who worked to restore wild turkey populations and their habitat. 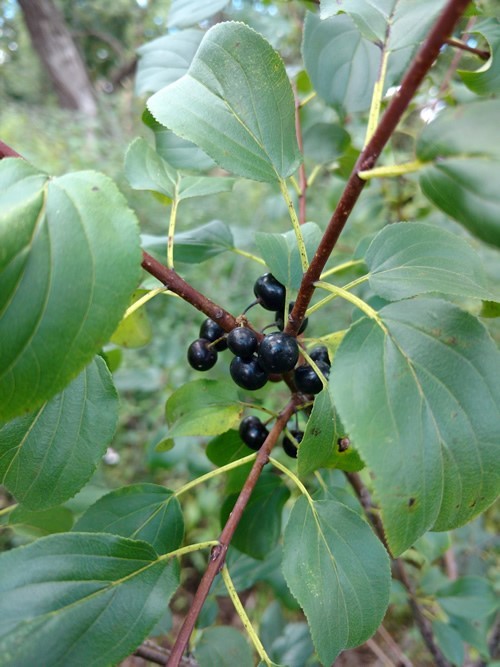 Common buckthorn (Rhamnus cathartica) can be found in upland forests. Look for the thorn, which can be found at the end of some branches.

Glossy buckthorn (Frangula alnus) can invade wetlands. There are no thorns. Look for the rust colored terminal bud.

See the buckthorn fact sheet for tips to identify buckthorn, learn about native look-alikes, and find methods for controlling buckthorn.

For a safe way to treat buckthorn stumps, you can apply herbicide with buckthorn blasters/dobbers: https://landscape-restoration.com/

Prevent the Spread of Invasive Species

Many invasive species are now beginning to develop mature seed. Here are some ways you can do your part to prevent spreading their seed:

Invasive plants can harm ecosystems and choke out beneficial native plants. Always be vigilant to prevent the spread of invasive species!